Back to the roots of camping with the Kaloha Camper.

Thousands of wateraddicts discover different beaches worldwide with their campervan. So does the surfer Jan Philipp Kentgens from Hünxe in Germany. When he finished his studies he came up with the idea for a demountable camper for dropside vans. The special thing of this idea is the camping character that celebrates the outdoor experience again. The feedback Jan Phillip got was so good that out of this idea came up the real project that he is working on at the moment. Reason enough for us to talk with him about his so called Kaloha Camper.

Hey Jan Philipp, first of all, this demountable cabin for dropside vans seem to be pretty cool. How did you came to that idea for the Kaloha Camper?

Actually the interior design of campervans and motor caravans depends on parameters of carbody construction. But I wanted to cocreate the external appearance of the draft and build a stronger connection to the outdoor space. Therefore the typology of the pick up cabin has the biggest potential for this purpose, because it is mounted only temporarily on the platform und therefore counts as load. The advantage is that the cabin does not need to be approved by the MOT, so we have more creative freedom with the design and materials. 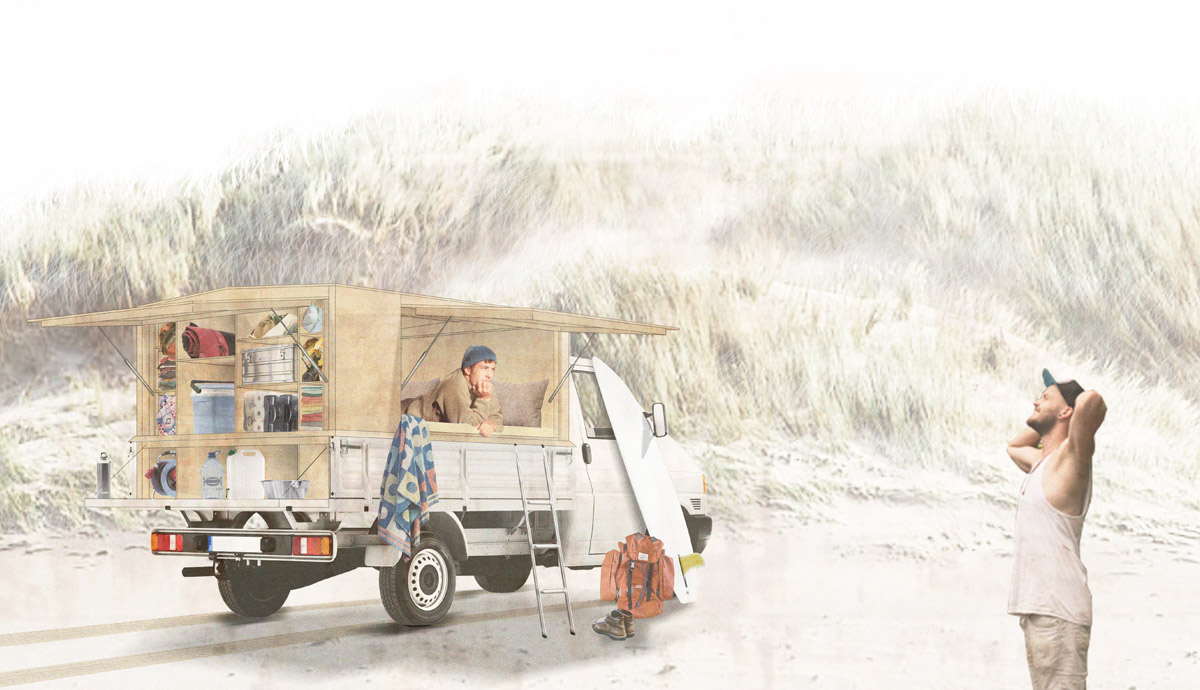 What kind of features does the Kaloha Camper have?

The main feature of the top part is a bed that was inspired by the historic alcoves. They originally consisted of a small bed recess in an isolated room without window. In a revised and camping adapted way, the concept of the top part follows this principle. The lack of windows of former alcoves beds should guarantee a better thermal storage and more privacy. The addition of the windows to the top part establishes the desired relation to the surroundings and nature. Moreover, it enables the supply of fresh, cool air while sleeping. Privacy can be regained by adding/setting up a built-in partition. The „camping-alcove“ is not limited to the sleeping function only, but – according to the „principle of penknife“ – it offers storage room for the luggage and a cooking option as well.

The top part is characterized by a high convertibility. As main element the convertibility is visible through the flaps located at the side and the rear. They are the elements that convert the interior to an outside part. The rear flap makes it possible to set up a kitchen containing a gas cooker, a cooler, and a bowl with a canister of water. It is possible to use the car’s back flap as work surface. The whole construction makes cooking in nature possible.
The other flaps correspond to the function of an awning or rain protection. With their help, you can stay and live outside even though there is strong sun or little rain. Should the weather conditions forbid living, eating, and cooking outside, it is no problem to do this in the interior thanks to an integrated folding table. 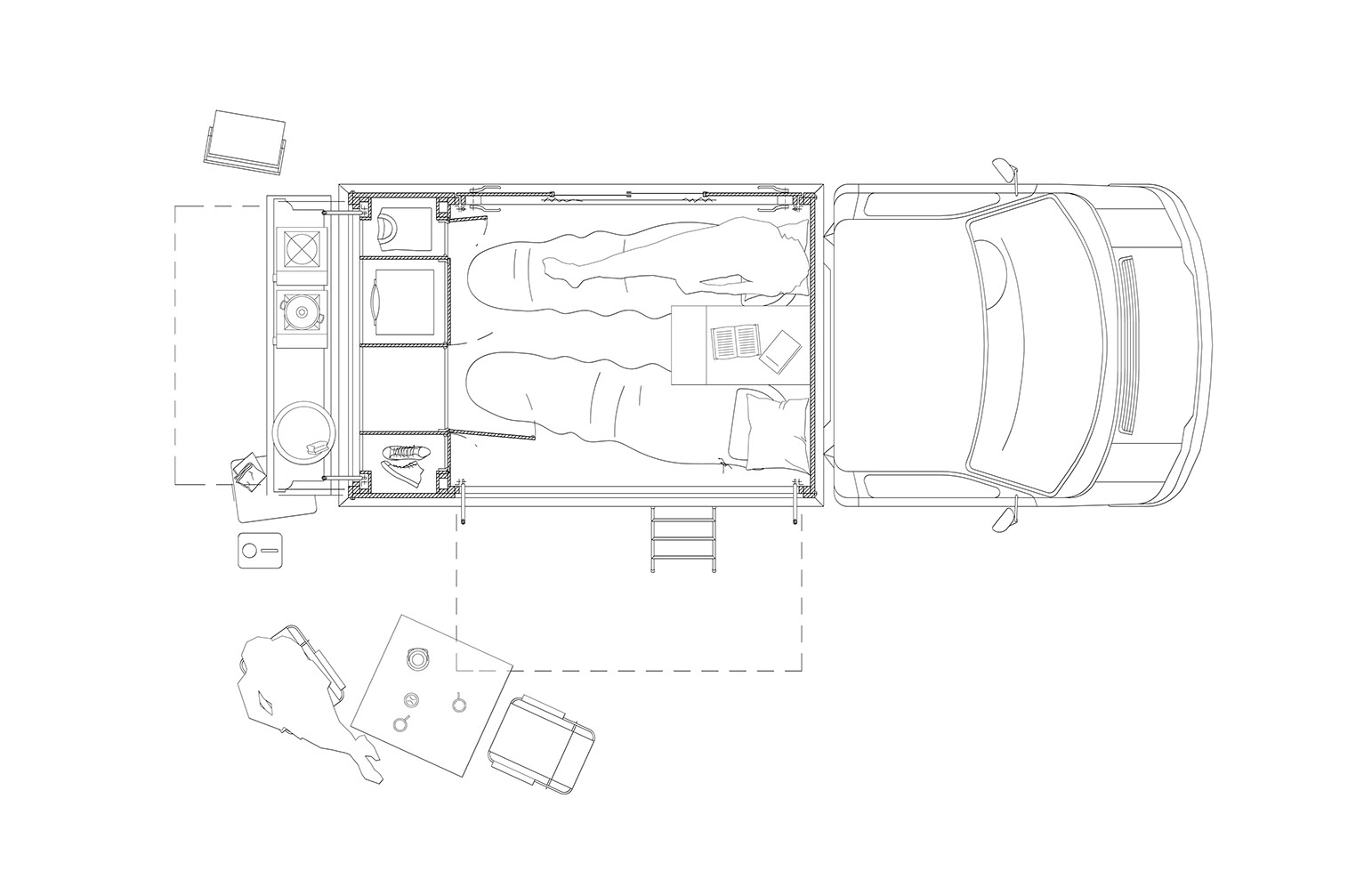 What do you think about the trend, that more and more people
just book a low cost flight to get to the coast just for a few days?
Is this still traveling?

I think this trend emerged because of the amount of vacation days everyone has per year, which is not that much to be honest. So people take the opportunity to get away with cheap flights. Now and then I escape the winter like this also. But it´s always as if you are placed into another world. There is no relatedness to the distance between home and holiday destination. Therefore you always need some time to acclimate and get used to the unfamiliar surrounding and the timezone.

It´s totally different when you are traveling with a camper where the landscapes is drifting by. You recognize and see the change of the landscape, the people and cultures whereby a relation is build up to each place. And that´s what traveling is about actually.

To me you need to distinguish between holiday and traveling. Holiday is about a temporary recovery at foreign places, whereas traveling is about exploring, getting in contact with foreign countries, people and cultures.

Why shall I get a Kaloha Camper instead of, lets say, a Volkswagen Camper?Where are the advantages and disadvantages?

A big advantage is that the demountable camper does not depend on the vehicle. The dropside van can be chosen for individual demands – Offroad, used cars as an affordable alternative and new cars. Furthermore, if the dropside van has an engine damage or wishes have changed, you just can exchange it on demand. Another advantage is that the connection to the place and the surrounding is stronger, because you spent more time outside.

The Kaloha Camper does not offer the possibility to stay inside which automatically causes that people spend more time outside. Moreover, through the characteristic flaps the interior space can be transformed into the outdoor space which is not possible in a normal camper van. There you are just able to use the sliding door which does not evoke the same closeness to the nature and the outside en general as the Kaloha Camper does.

One could see a disadvantage in purchasing a dropside van because it is not a daily life vehicle. But even if you purchase a campervan, you do it for being abel to travel and are aware oft the restrictions in daily life. Basically it´s the same with the dropside van.

The Kaolha Camper is made for warm till mild climate, because you´ll stay more outside. So maybe the Kaloha Camper is not sufficient for people who prefer to travel a lot at bad or cold weather conditions. Although you can cook, eat, relax and sleep inside as well, even though in a reduced form. This minimalism is intended to make camping an outdoor experience again.

The Kaloha Camper offers more mobility than a tent because everything that has to be put up, like a tent, minimizes that desired mobility during traveling time. Better said – the time you need to put up your tent influences your journey. The spontaneity disappears. Furthermore, you are more flexible referring to the selection of your sleeping place with the Kaloha Camper. With the Kaloha Camper it is easy to park wherever you want – it doesn’t matter if you are staying at a camping ground, in nature or at a parking space. By using a tent you have to make up your mind more about the place you would like to stay or sleep. When you would like to enjoy the freedom of not staying at a camping ground a tent would be the wrong choice. Because the Kaloha Camper offers more safety than a tent. 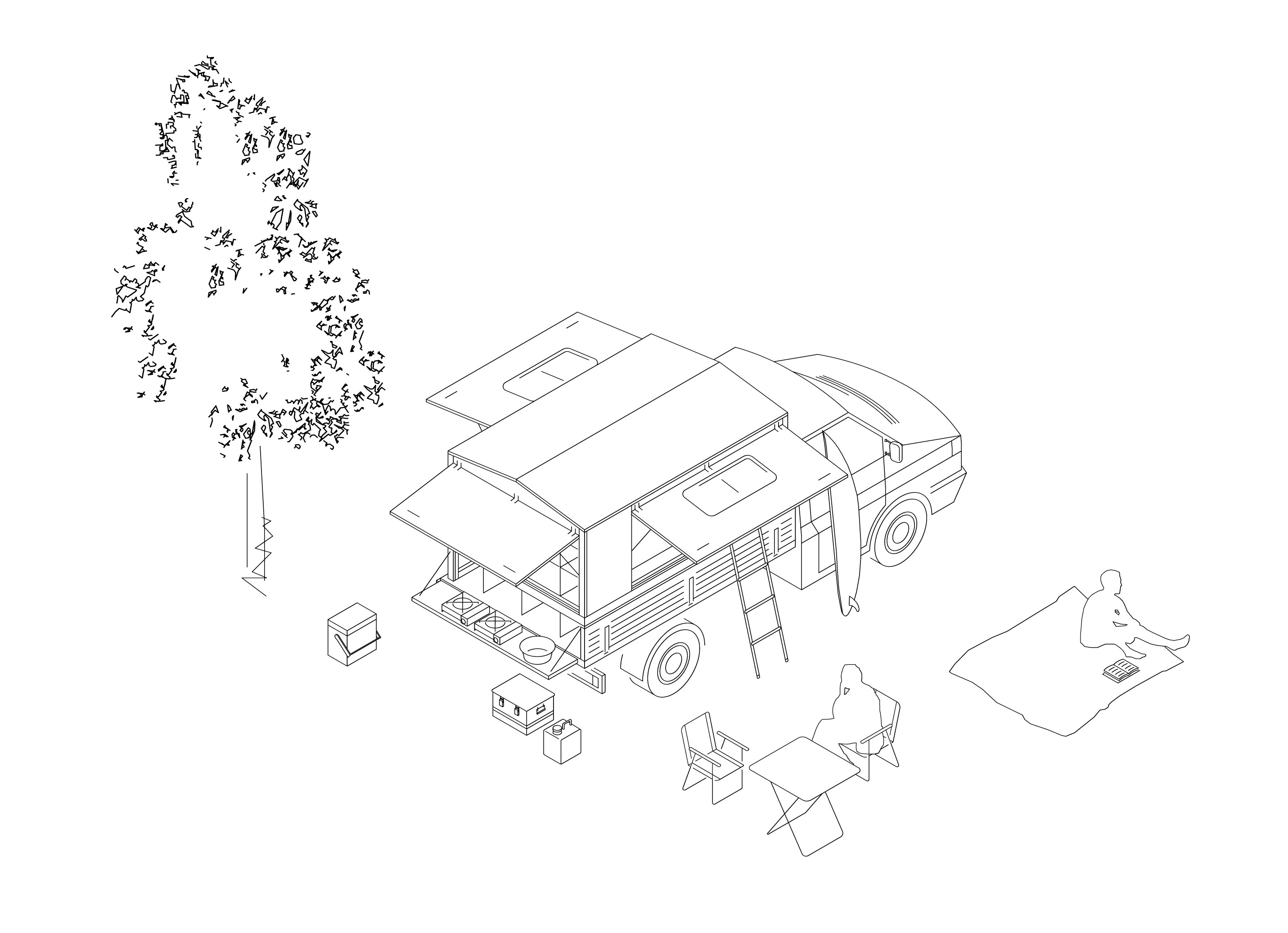 How about sustainability? What kind of materials are you using?

In the beginning the draft was about constructing the cabin of wood or plywood-plates. On one hand because oft the warm character wood emits and on the other hand because of the sustainability. When I presented the project to Christian Goldstrass, the carpenter who supports me, he was the same opinion in all parts. But he questioned the solidity of the cabin when exposed to extreme weather conditions. Through a personal contact of Christian, we presented the whole project to „M. u. H. von der Linden“, a company that works with innovative technologies for building yachts and therefore uses different materials.

Soon it came out, that the „DuFlex“ balsa panels would be the right choice to build the Kaloha Camper. The panels are made of the balsawood as corematerial and two tissue layers that provide the material with the required stability. After the assembly the surface needs to be treated with epoxy resin, to make it weatherproof. We intend to use clear lacquer to obtain the wooden character – at the moment we are trying out different possibilities.

In summary it can be said that due to the use of the DuFlex balsa panels the Kaloha Camper will be lighter, more stable and weatherproof. Unfortunately the Camper needs a chemical aftercare but this will make it more durable and therefore more sustainable.

How flexibel are you? Let´s say I have got a dropside van from Fiat, Mercedes or Volkswagen and then I contact you. Are you doing custom shapes? Or is there a demountable camper that can be adapted to every vehicle?

Thanks to the good consultation of the DEKRA we were able to refine the design, so we work with protrusion to the sides and the back. Thereby we need to follow restrictions of traffic regulations, but can generate an universal demountable camper van, which is adaptable to different dropside vans. Unfortunately we cant supply for all available dropside vans. But for a little change we could do individual adjustments. (Kaloha Camper Prototype) 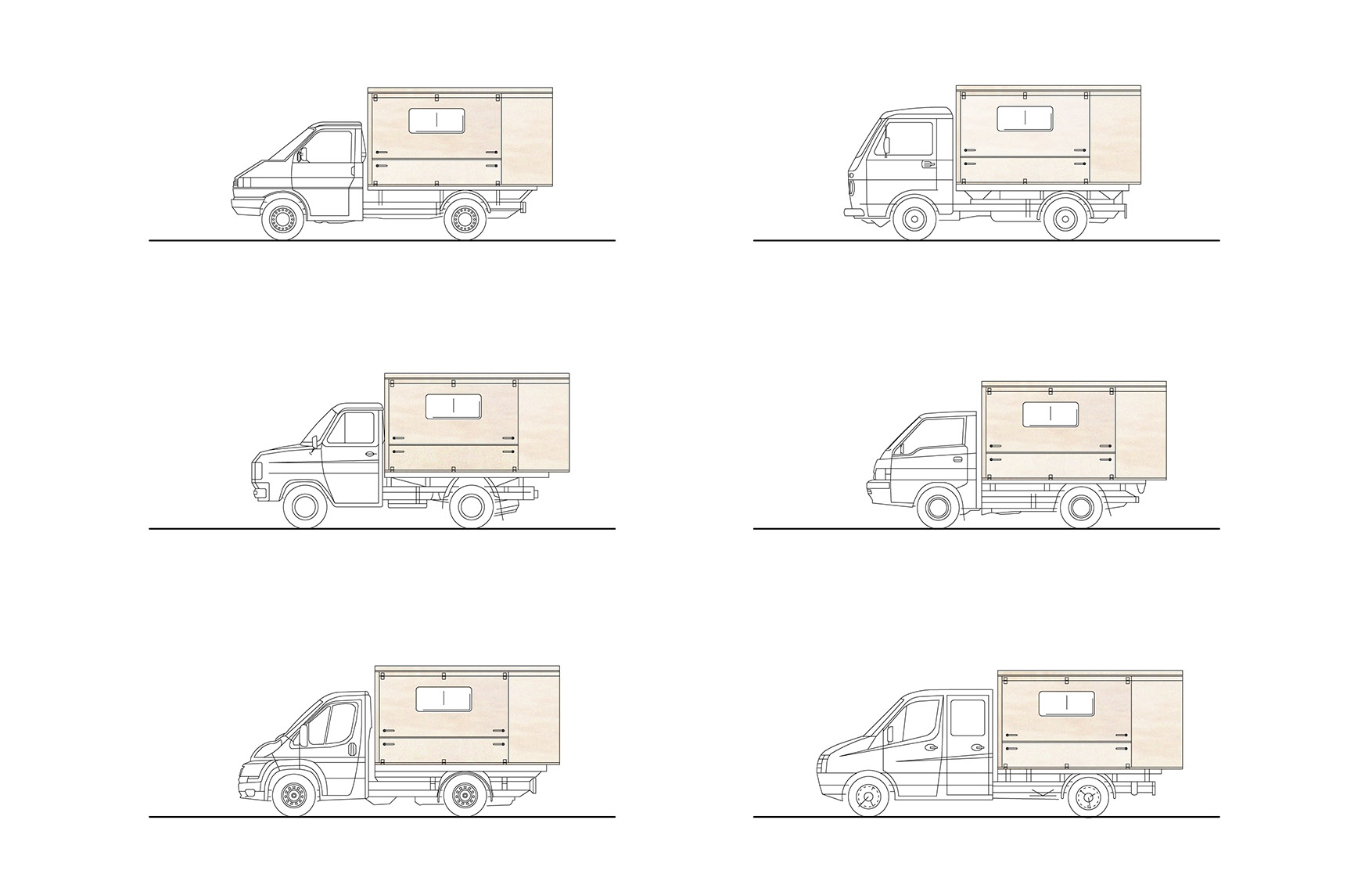 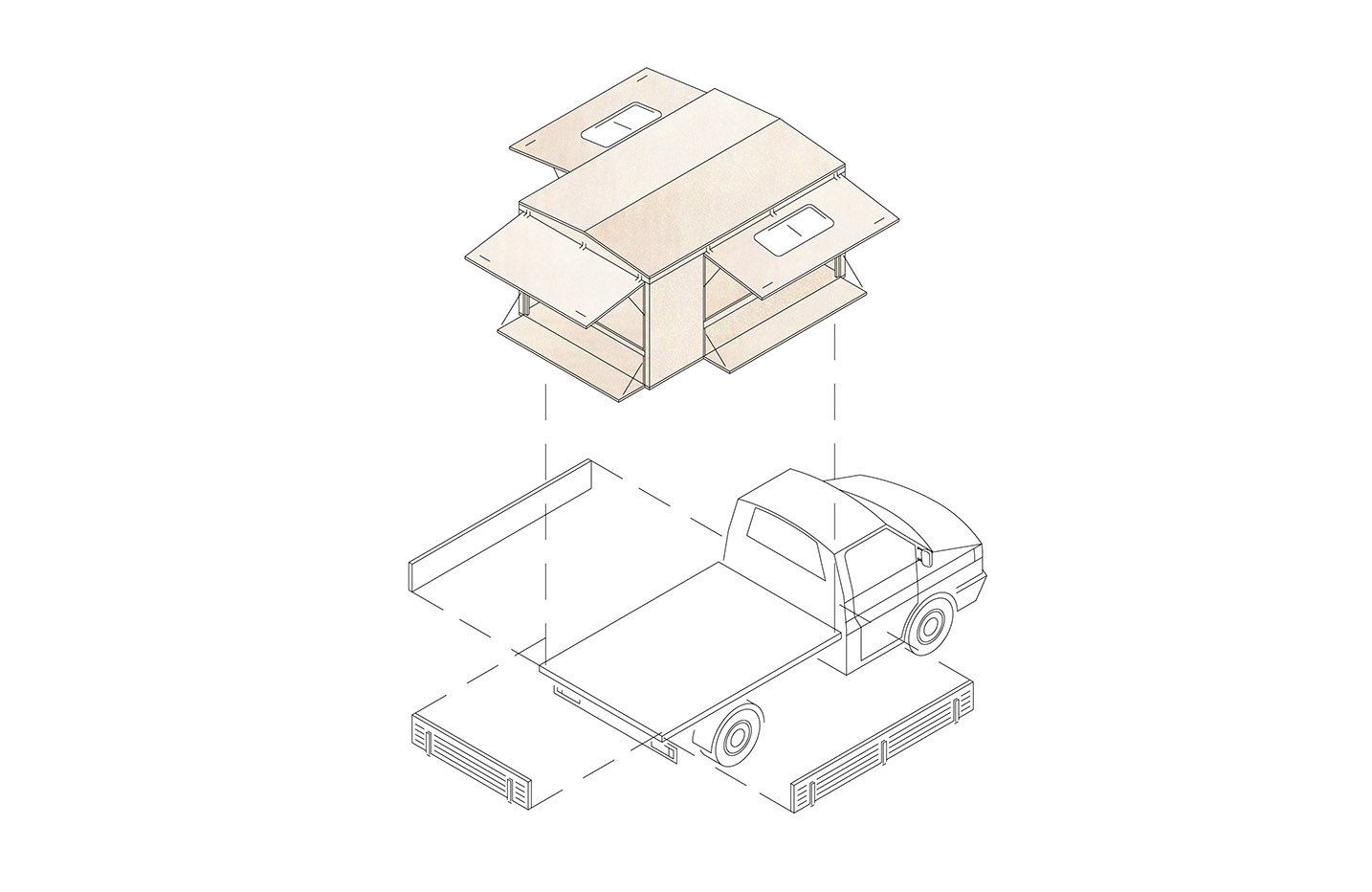 When will the first prototype be presented to the public?

There is no fixed date yet because it is hard to say how long it will take till we finished the prototype. Possibly we will be done with work in a few weeks. But if there are some unexpected problems we need to make some changes and therefore we need to work a little longer. But we start as soon as possible with the construction, that´s for sure.

How about campaigns or promotion for this project?

There is no campaign planed yet because it´s all up in the air how everything continues after finishing the prototype. Crowdfunding would be a nice option for promoting the project and get financial support for campaigns, exhibition appearance and preparations for the production itself.

Assumed the first realized model is ready.
Where would you travel first in it?

To the ocean! Best to Portugal in the Western Algarve or Alentejo. Galicia in Spain would be another nice option. Maybe it will be just a short trip to the Netherlands. Anyway, there is no lack of ideas. 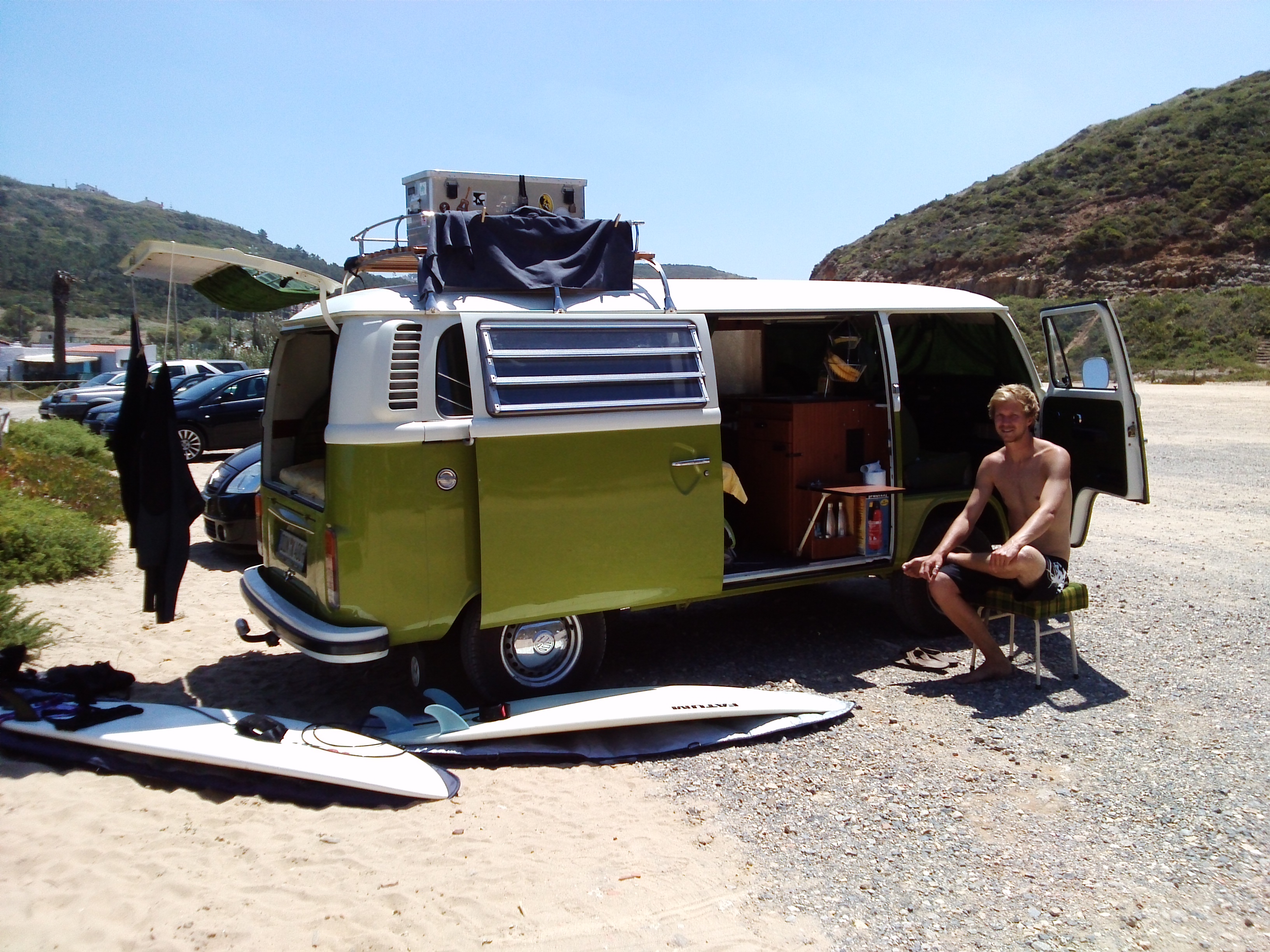 Until the first Kaloha is realized, Jan Philipp Knetgens keeps on traveling in his Volkswagen Camper.