Four years ago I was sitting at the „Botschaft“ in Hamburg, my eyes glued to the white wall which was covered with moving images. These images where part of a screening of the surf movie The Old the young and the sea – a surf travel-documentary that was less focused on pro surfers traveling the world but rather on random people try to live their daily lifes close to the sea – a new new approach to the subject „Surfing“ in between all the typical movies that existed back then and therefore outstanding. Now the crew is back with a new movie called „Beyond“. This time they watched out for surfing souls and other charismatic people along the african coastline. I had the honour to talk to Andreas Jaritz about this amazing new project.

It has been quite a while since “The Old, the Young and the Sea” has been released and inspired people worldwide. What have you been up to since the first wave of popularity has faded and you began your current project?

Actually, there was an imperceptible transition between OldYoungSea and the project Beyond. There are always several months before the public recognizes the intended actions, because you are busy with research, creating concepts and treatments, meeting potential sponsors, conveyor applications for the film and tons of meetings. This part, the pre-production, was already on its way ( I had to look up it my files myself ) in April 2014. Damn, 2017 is almost over by now … What happened? 2014 and 2015 were packed with planning and funding. We set off in September 2015. 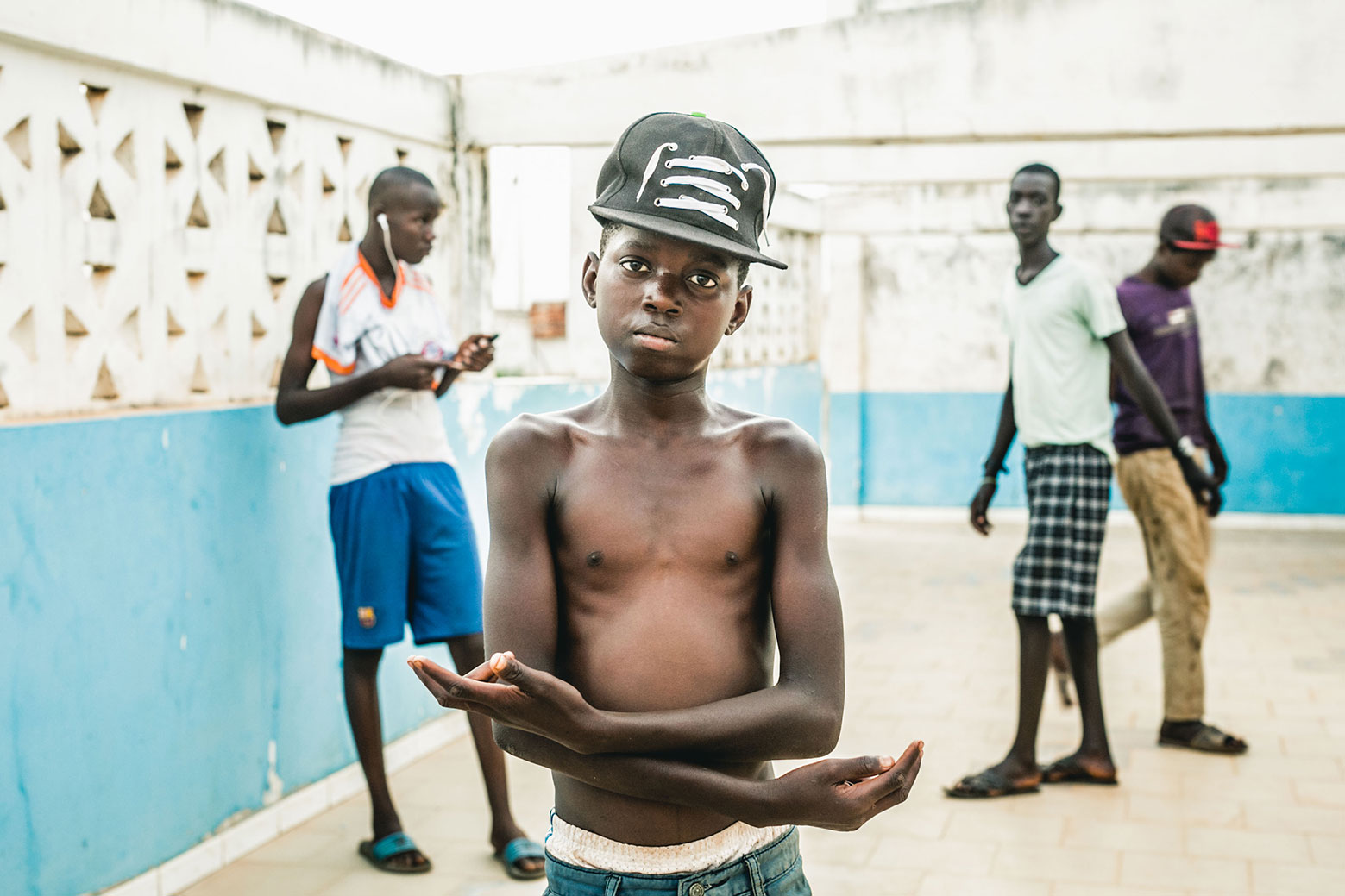 You have been cruising the coasts of West Africa for three months and collected a lot of material, which was the foundation for your impressive surf travel-documentary, 117min long. How hard was it to cut all the material we won’t see in these 117 minutes?

Mario and his editor are better judges for this question. But I can contribute a small story to this topic: I was working together with our cameramen on a big wrestling story in Dakar (wrestling is ranked as the national sport no. 1 in Senegal, great show, great culture). At the same time, the second half of the crew was in the south of Senegal, Casamce, hunting the next story. We were driving twice a day for five days back and forth between Dakar and the satellite cities (because there were also other shootings). Four hours in that chaotic capital with traffic jams and unbearable heat every day. Awesome story, awesome pictures, stunning material. The story didn’t make it into the movie. It didn’t fit the overall structure. This is how it goes. It broke our heart, but this is how it’s done.

At our house the so – called Serendipity belongs to the daily business. Both, OldYoungSea and Beyond, are based on these lucky chance encounters, which brought us to the next story or at least to the next contact. But the trip nevertheless follows an elaborate concept and treatment, which were planned stories that could happen or were likely happen like this. The challenge was always to find those people, who had already lived through those kinds of stories. It’s indefinitely a mixture of contacts and stories you research in advance, and those you gain from new story hunting with unpredictable endings. That’s what makes it exciting but stressful at the same time. Sometimes you realize, after 1-2 days of work with a protagonist, that the a story never gets to the point.

That can be frustrating sometimes. 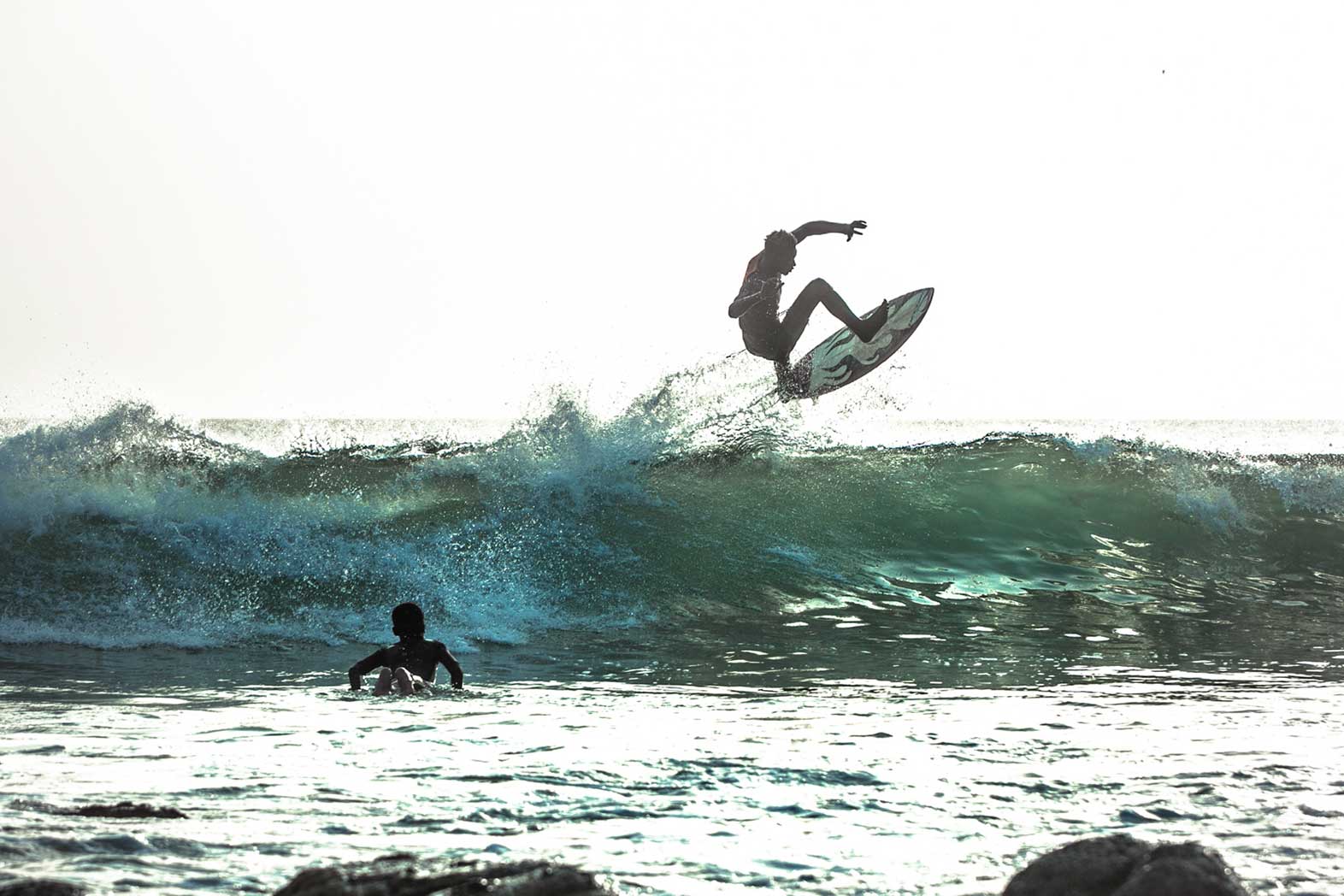 Which parts of your plans manifested
and which fell victim to higher powers?

Interestingly enough, we were able to realize the concept, or treatment, most of the times as it was planned. Sadly, one story we had to scrap completely. On a research trip to Gambia, we stumbled on an exciting story at a river, which defines the border of Senegal and Gambia. The truck drivers sometimes had to wait for weeks, until they were allowed to pass the river (it was a political and economic calculation of the Gambian government), so that this place created its own “waiting-infrastructure”. When we went back there for the actual shooting, the situation had changed and the traffic was flowing regularly. Too bad for the story, but good for the truckers.

Which event from the trip will create
an unforgettable memory for you?

In general, the entire 90-day journey itself; it pushed me to the limits and often beyond (more often than I would have liked). That’s what always sticks in my memory. I wasn’t able to be myself the whole time, or the person I would like to be. At one point, in the middle of the trip, I was utterly exhausted but extremely loaded at the same time, because so many great things were happening. Speaking for myself, it was too sporadic for my body and soul.

As for a single event, I would say the detour to the Moroccan Sahara and our time in Zagora. I met the friendliest people I have ever seen. And the desert is just a very special place, like the ocean.

In terms of surfing, I will always remember the session with Felix and Roman (both at the camera), when we went by a military station close to Dakhla. The most awesome point break wave ever. The line-up was 20 meters away from the beach. You could just walk like in a wave pool along the beach, wait until a set was over and the coming up was in sight, then you’d walk to the break, get on your board, let yourself be flooded from the sickest stream along the beach and then, when the set arrived, surf along the beach for 200 – 400 meters straight. 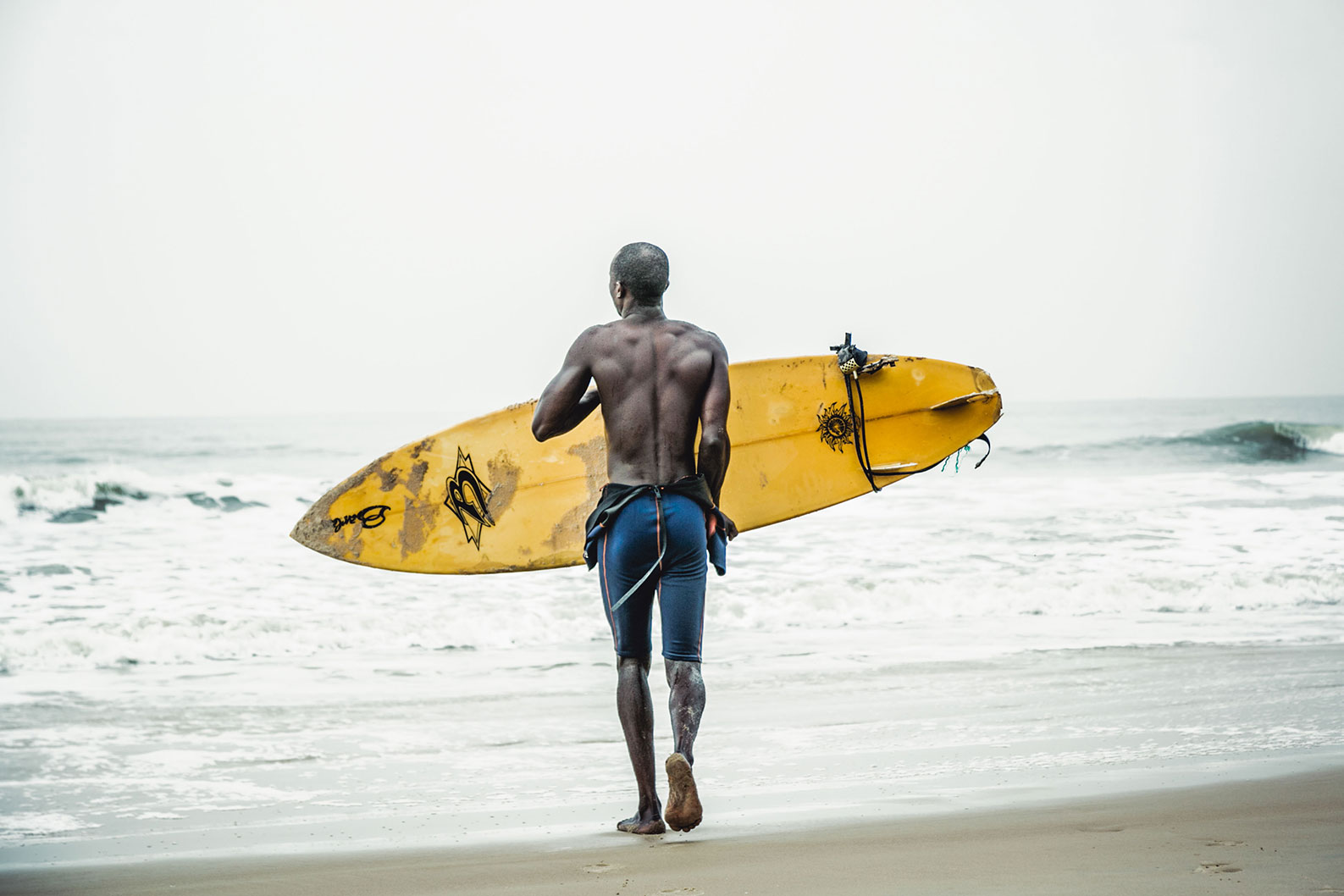 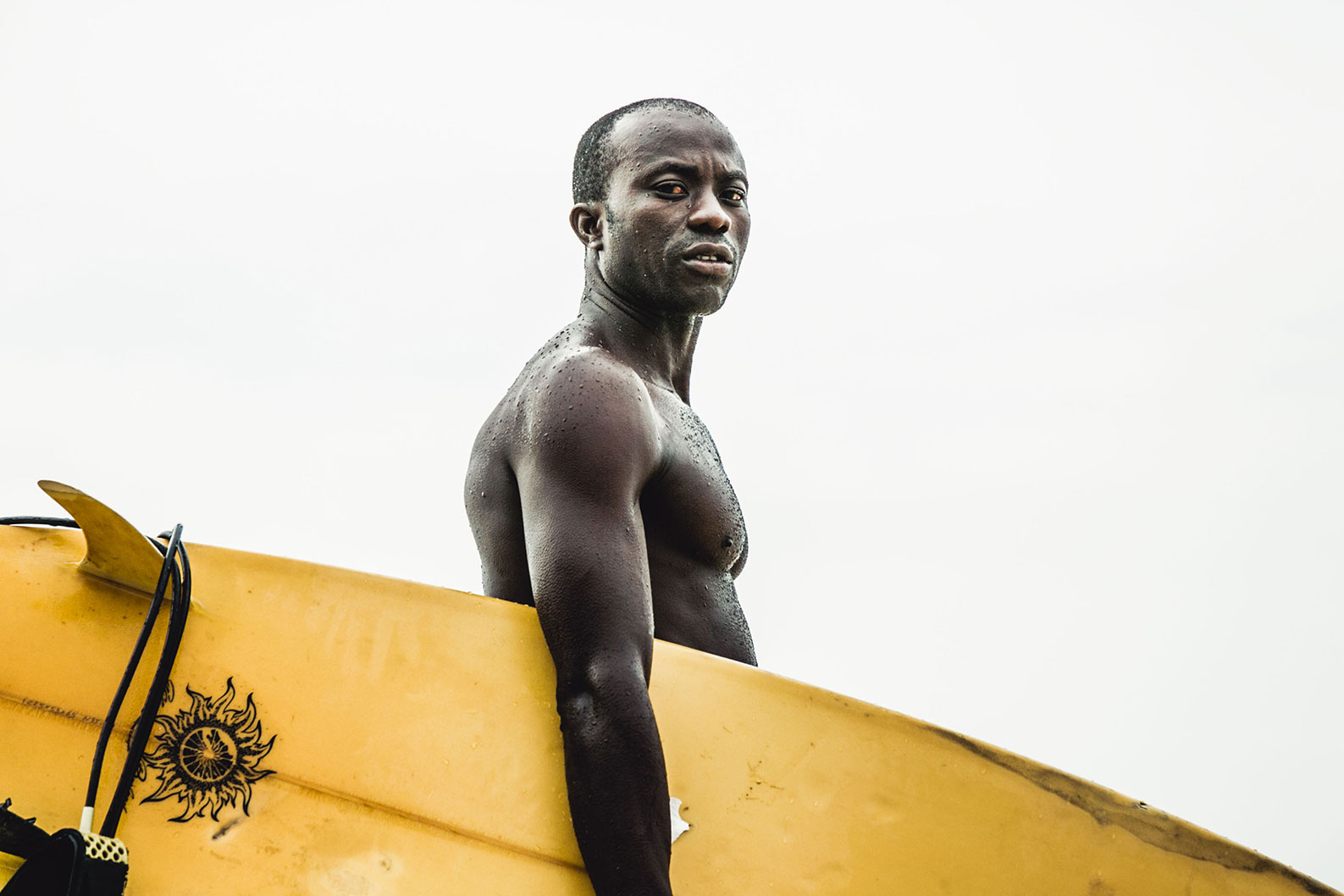 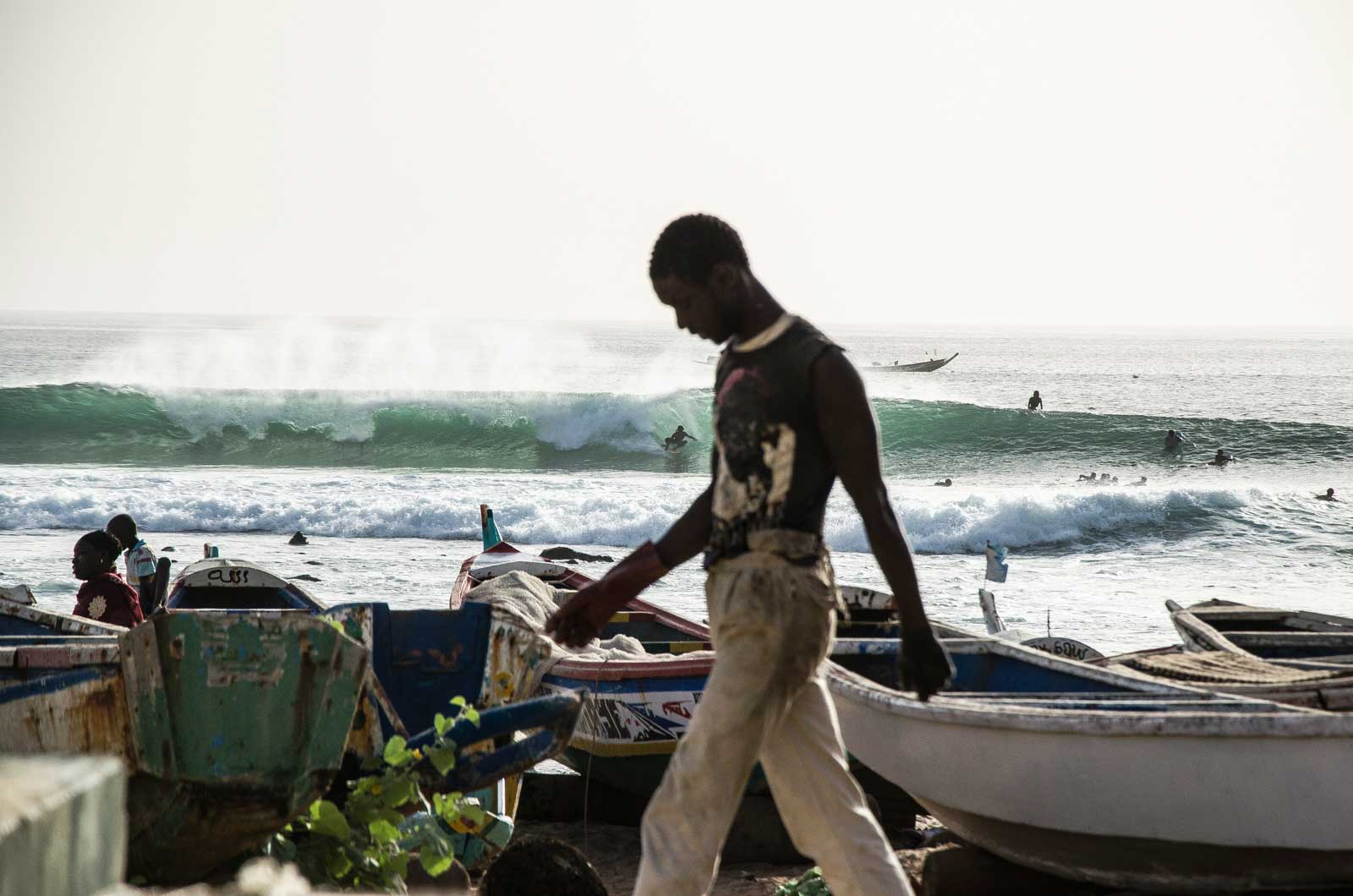 You have met a lot of people from various cultures on your trip. What can we, as Europeans, learn from these meetings?

The image that most of us have of Africa and its people is incorrect. On the one hand, there is no “African”. It’s the same in Europe; all these beautiful people belong to different local (sometimes tribe-) culture. They all have their very own lifestyle. There are locals like the Moroccan, Mauretanien and Senegals, which are all way closer to our culture than we believe. Sadly, (and this is on the positive side) the people are not that exotic (or even a wild rarity, an exhibit, as some xenophobic people think of Africans). They are just normal dudes, like you and me. A lot of them just weren’t lucky in the lottery of life, to be born in Europe.

Besides a great film, what did you get out of this trip?

We were allowed to take a look back in a lot of places. I am not saying that Africa is running a little bit behind, but quite the contrary. Africa is moving; there are things going on. But still there will be a lot of them trying desperately to escape to Europe. I wish for a better life for them. But there is also a young, growing generation that has the opportunity to study, a chance to work and the prospect to make progress from their own energy. 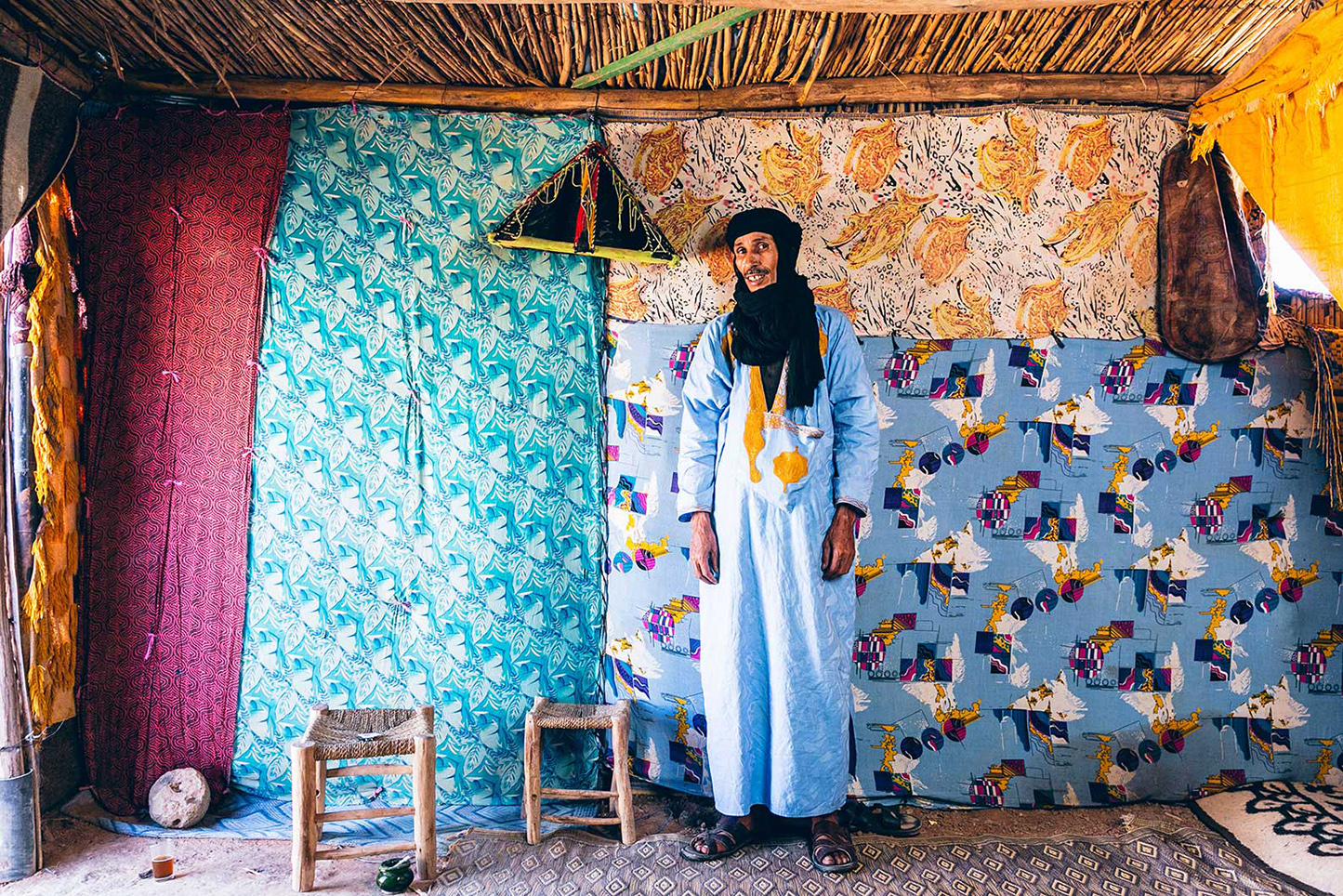 For months, you have been teasing the film with nice, colorful pictures on Instagram. Where do you see the difference between photography and moving-image?

For a qualified answer, you would have to speak to our photo- and film-department. I’m a producer, didn’t film on the set, and just took some pictures on the side. Of course, I do have plenty of daily business in the scenery of film and photography, but I am not an expert for sure. What I can say: To take a picture is not that hard. However, great pictures are rare. If you want to tell a story through a picture, you must have great skills. But filming (at least in my opinion) is the hardest of all audiovisual disciplines. You have photo, storytelling in many frames, you have speaking and language, sound etc. Just to create an okay-ish edit with pretty nice pictures, you already need to work a lot. And anyway, it doesn’t matter if it’s photo or film: documentary is on a whole other page then commercial photography or advertisement films. Documentary and commercial are two very different disciplines, you can’t compare them.

What equipment did you use for filming / for photography on set?

We had a pretty broad setup; in terms of filming we had a Sony Fs7, FS700, A7S, and a Panasonic GH4. We used all kinds of different lenses, primes and non-primes. Really diverse. Metabones adapter, speedbooster, and tons of ND Filters, too. In terms of photography, Judith used a Canon EOS Mark III. Some 16-35mm lenses and many 35-70mm. Felix also brought his Ronin. If you are interested in the equipment details, you’re welcome to talk to Mario.

Awesome, thanks so much for your time, Andreas.

Don´t miss the screening of „Beyond“ in your town.
Check out all the dates here.